My Wikistrat webinar transcript “Oil Price War & COVID” from a couple weeks ago is now available on their website as a PDF.  Issues discussed include:

END_OF_DOCUMENT_TOKEN_TO_BE_REPLACED 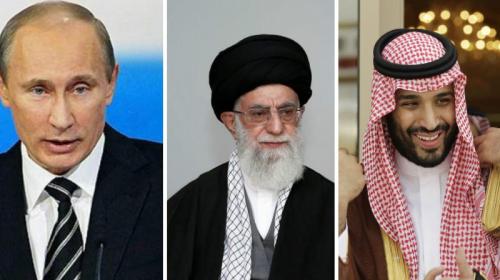 Last week, Gillian Rich at Investor’s Business Daily (Washington), asked me (Berlin) and others about the OPEC’s 20-21 June meeting. Below here, I give my views in more detail, including the tie-in to the Trump project to isolate Iran and my comment about Putin likely betraying the Iranians again.  The IBD piece is here: Trump Could Make OPEC’s Next Meeting As Dysfunctional As G-7 Summit. 15 June ’18.

We spoke about market and geopolitical aspects. On the latter, I emphasized both the Trump Administration’s evolving plan to sanction and isolate Iran, and Russia’s new role as a central player with OPEC ever since the 2016 joint Russian-OPEC decision to raise production.

That’s when Putin played a new role for any Russian leader. Not only did he coordinate Russian oil policy with OPEC’s, he got personally involved in heated discussions, getting on the phone late in the last night with Iranian and Saudi leaders to get the deal sealed. END_OF_DOCUMENT_TOKEN_TO_BE_REPLACED 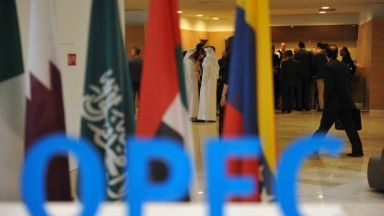 I was interviewed by Matt Egan of CNNMoney. Three points, if I may:

Here’s the CNNMoney piece by M. Egan of 1 December 2016 (with my quote highlighted): END_OF_DOCUMENT_TOKEN_TO_BE_REPLACED

RT Radio-Edinburgh’s Jack Foster interviewed me on the upcoming 30 November OPEC summit where the Saudis hope to set a cap on OPEC and Russian production. Here’s the interview:   Listen from time-stamp 9:00-to-17:30 (Streaming MP3)

This would  mark the first-ever Russian cooperation with OPEC. However, market realities look bleak for OPEC and Russia whether they reach an agreement or not. The reason is the unprecedented continuing challenge from US shale, which has dramatically cut its costs via tech and operational innovations to stay profitable at low prices. END_OF_DOCUMENT_TOKEN_TO_BE_REPLACED

Presidents Rouhani of Iran and Putin of Russia holding discussions

(AICGS Analysis, by Tom O’Donnell)  Since Russia’s president, Vladimir Putin, decided to annex Crimea and back east Ukrainian separatists with troops, many have worried he might use his “energy weapon” to counter U.S.-EU sanctions, as Russia supplies around a third of the EU’s natural gas imports.  But what about Russian retaliation in the oil sector?

That’s hard to imagine. While gas is marketed in bi-lateral, pipeline-mediated relationships, oil is not. It’s liquid, fungible, and marketed in a unified open market—“the global barrel” [and name of this blog, T.O’D.]—which means there are no bi-lateral oil dependencies.

So, when EU leaders were cajoled by Germany’s Angela Merkel into joining the United States in applying sanctions, Russia could do little to retaliate from within the oil sector.  In reality, it is the EU and the U.S., not Russia, that have an “oil weapon” in hand.  And, the flurry of Russian oil diplomacy with OPEC, Iran and China over the past couple of weeks has a distinct whiff of desperation to it. END_OF_DOCUMENT_TOKEN_TO_BE_REPLACED

A wide-ranging interview on the “perfect storm” of low prices from low demand plus rising production, the Saudi market strategy and some geopolitical implications.

For Spanish speakers: below is an article from Tal Cual daily in Venezuela summarizing my blog on Saudi oil minister al-Naimi’s opinons on the “North American tight-oil revolution” and their implications for Venezuela and Iran.  The article is by Jose Suarez Nunez. 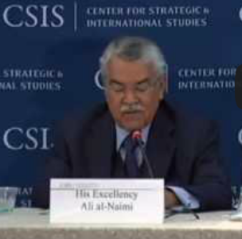 Last week in Washington, I attended a talk by Saudi Oil Minister and head of Aramco, Ali al-Naimi, at CSIS.  Energy and foreign policy veterans from Daniel Yergin to Brent Scowcroft and Dr. James Schlesinger were on hand to hear al-Naimi’s views. You can read the transcript here, or watch the video embedded below.

Al-Naimi’s contrasted his central theme: “the enduring relevance of oil,” to the predictions made for many years by the adherents of “peak oil”–a theory that he said had itself “peaked in 2009” and has now been shown to be “utterly incorrect.”

Bad News for Venezuela and Iran?

Listening to him describe the global impact that the U.S.A. tight-oil “revolution” will have on the market,  plus with Alberta’s heavy oil and so many other new sources from around the globe all coming to market, brought to my mind images of the 1980’s.  The 1980’s were the “lost decade” in Latin America. It strikes me that, if he’s right about the trajectory of the global oil sector, the consequences for OPEC’s “price hawk” faction would be sobering. END_OF_DOCUMENT_TOKEN_TO_BE_REPLACED