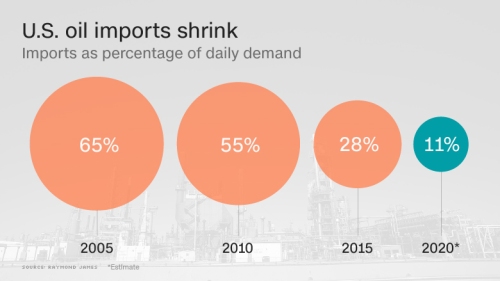 Mr. Trump promises he’d use the USA’s shale-oil revolution to deliver “complete” independence from foreign oil, telling voters in May: “Imagine a world in which our foes and the oil cartels (sic) can no longer use energy as a weapon. Wouldn’t that be nice?” But, he is confusing two quite distinct things:

“Energy independence” – in the sense of the USA producing more oil than the country consumes – is indeed possible, even “tantalizingly close” as this CNNMoney article (Aug. 9, 2016, by Matt Egan) makes clear, citing myself and other experts.  For clarity, I’ll call this “net oil-exporter status.”

However, Donald Trump asks us to “imagine” he can use this net oil exporter status, to make the US independent of the global oil market and oil in geopolitics where our “foes” and “cartels” have leverage.

Two points: First, consider the market. Making the USA an energy island, independent of the global oil market and its geopolitics  is patently impossible for any US president to achieve, even if the US becomes a net oil exporter. As I told CNN: “We can’t escape the global market. It’s very unlikely we’ll have an island effect.” To escape the global market and all its geopolitics would require not only stopping US imports, but also exports. Otherwise, the price of oil in the USA is part and parcel of the world price, subject to its varying demand and supply, its ups and downs.

Second, consider the geopolitical part: The US is hardly at the mercy of our “foes” and “cartels” by participating in the global oil market (i.e., what I call “The Global Barrel”) . This image of oil being used as a “weapon” against the USA is rather demagogic.

Think back. When was the last time any foreign “foe” used oil “as a weapon” against the USA or its allies?  Not since the 1973 Arab-OPEC oil embargo.

(Aside: Or, perhaps the 1985 Saudi net-back crisis, though arguably that was a Saudi reaction to a price war launched by Mrs. Thatcher’s government with the approval of President Reagan, a neo-conservative strategy to “destroy OPEC” that backfired (for this version, see Daniel Yergan’s account of in “The Prize” Chapter 34”, although others, such as R. Mabro, describe only market strategies all around.)

Of course, one can choose to think of the present Saudi moves to increase output to preserve its market share – which has been helping to drive prices down since September 2014 – as a “war” on US shale producers.  But, clearly this too is merely a rational market response to US shale producers’ rapidly rising output beforehand. In fact, one might now say the Texas producers have fought the Saudi’s strategy to a ‘standstill” on this one (so argues a well-documented recent piece in the Telegraph).  In any case, none of this rather rational market competition is some sort of attack per se by “foes” or “cartels” upon the USA – in fact it has all driven further downward US consumers’ price at the gas pump! In short, 1973 was the last significant concerted geopolitical use of oil as a weapon..

As a consequence of the 1973 energy crises when the Arab states in OPEC openly weapon-ized oil, the global North’s first world states represented by the OECD (Organization for Economic Cooperation and Development) answered the embargo by founding the International Energy Agency (IEA) under the OECD. This was done on the recommendation of the USA during the Nixon administration, specifically by Henry Kissinger.

The key element of this was the establishment of a system of “strategic petroleum reserves” where, within one year of the 1973 embargo, every OECD member state, as a pre-condition for joining the new IEA, put the equivalent of 90-days of its oil imports into storage. These SPRs were set up to be brought rapidly to market under centralized control as a counter-weapon should OPEC or any other producer ever again exert geopolitical leverage by cutting off supplies.  Because of this system, no embargo has ever again been launched by any producing states. So, protecting the US from “foes” and “cartels” using oil as a “weapon” in this way, is already well beyond Mr. Trump’s stage of “imagin(ing).”

To be fair, I should add that, if anyone has used oil as a geopolitical “weapon” in the last couple decades, it has been the USA and its European allies and the UN, all of whom imposed sanctions on Libya, Iran and Iraq that denied those states full access to the global oil market. Looking into the details of how these sanctions were accomplished, is precisely because there is a global, highly coordinated and integrated market, and exclusively traded in US dollars, that such effective sanctions were possible.

Domestically — Low prices are already here, and will likely persist for a considerable period of time as a result of the US shale oil production explosion. Imagine if the USA were to become an energy island in a Trump presidency, how likely do you “imagine” it would be that some US firms would be enticed by the idea of raising the USA’s oil price above the now very low international market prices?  This continuing shale revolution, driven by low international oil prices, has brought both continued technical-innovation and productivity enhancements characteristics of Silicon Valley to US shale-oil-and-gas fields (a point I stressed to CNNMoney). And, all this has taken place during the Obama years under its “all of the above” energy policy.

Foreign Policy — The global oil market itself has already eliminated any deep, bi-lateral dependencies or vulnerabilities between individual producing and consuming states as nearly all oil produced today passes through the global marketplace (AKA the virtual “Global Barrel,” the title of this blog ). This means that if any state stops producing for any reason or if there is a demand spike, this will only reduce the level of oil in the global barrel (marketplace) available for each consuming state equally.  The price for all consumers goes up, and all producers are induced to produce more if they can.  This sort of global high-price signal is exactly what drove the US shale revolution’s innovations when prices were at record highs (i.e., before late-2014).

But, of course, unavoidably, with this international system comes US involvement in especially the Persian Gulf (still the location of the largest and most concentrated oil reserves) and other oil-laden areas of the globe. There is no escaping this global oil-market geopolitics.

Albeit very imperfect and involving significant conflict – it is a big step forward from the old, neo-colonial system where seven big firms controlled the international oil system,  privately set prices and supplies, there was no oil market, and  these companies outright owned the oil reserves of producing states. States of Latin American, the Mideast and Africa had little input, much less than today, with their rulers merely collected oil rents delivered by the big international firms.

Still there is much abuse in the use of oil income through corruption, enrichment of elites and funding of conflict and terrorism in producing states; and still there is a certain power in the hands of the international firms, which is at times abused.

What one should be clear about however, is that, if-and-when the USA becomes a net oil exporter, the price of oil in the USA will continue to be a function of the global oil market and respond to the ups and downs of OPEC, Saudi, Russian and other oil producers’ output levels. This is the global era’s oil geopolitics, from which there is no essential escape. But, frankly, this is a better system than the previous neo-colonial one.

Clearly,  US presidents over the last few decades – most especially the GW Bush administration with its dishonest “war of choice” invasion of Iraq unleashed terrible misery in the  Arab world as this weekend’s NY Times Magazine impressively demonstrates, and arguably only made the reality of terrorism and regional conflicts worse – could and should have handled this geopolitics much better.

But, the idea that oil geopolitics can simply be escaped is an illusion.  As I told CNNMoney (article), US energy independence (i.e., net oil-exporter status)  does mean more flexibility in geopolitics: “The more oil produced by the greater number of countries, the less leverage that certain countries who behave badly have.” (For example: in the gas sector it is the same: Russia’s Gazprom wants to use gas supplies to Ukraine as a weapon, but US and other countries now abundant gas supplies entering the global market, much of this from fracking, means Russia cannot play this game as surely as it once did.)

Instead of telling voters to “imagine” escaping from the global market place, Mr. Trump would be more useful if he helped voters imagine how to compete successfully in the modern, globalized world. He could show some compassion in the form of advocating social-benefit programs, job retraining and such for those workers and small-business owners in US undergoing painful transitions to become more competitive in a globalized world, or that have simply been defeated by global-market developments.

He should also not pretend he can have the US leave the geopolitics of oil behind, but rather offer serious policies how to handle this realm better and lessen the level of conflict, as the Obama administration has seriously worked to do, although of course not always successfully.

In any case, read the CNNMoney piece, here, … it’s much shorter than this blog!