How fast can Libyan oil recover? (I’m quoted by CNN) 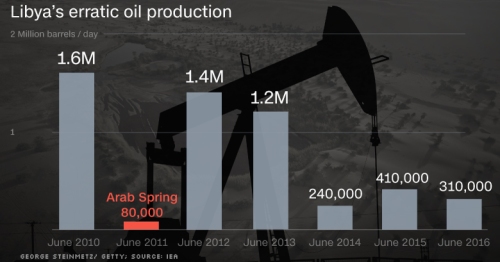 The oil market remains glutted, with price in the mid-$40’s.  Despite furtive hopes over recent weeks  by the business press about “imminent re-balancing” of global supply v. demand and about “draw downs” of record-high global storage inventories, data reveal only incremental re-balancing has occurred since fall of 2014 when this all began. (And, from November 2014,  the Saudi’s responded by fighting for their market-share rather than for boosting price, which would have been impossible for OPEC to do on its own given the huge supply glut.)

In this reality, any major increase in Libya’s production – its production potential is large and its oil is high quality – would be yet another boost to global supply glut, prolonging depressed prices – although the boost to Libyan revenues would greatly aid the people of that war-torn nation.
So, here’s the issue: In recent weeks ISIS forces in Sirte appear near defeat, a new UN-brokered central government has been asserting its authority, and the two factions of the Libyan national oil company have just reunited, promising to boost output. In this situation the question put to me by CNN’s Matt Egan yesterday (20 July 16) was: What are the prospects for a boost in Libyan production?
Here’s my explanation of why one should not expect a big increase anytime soon: (to see my brief quote read the CNN article of 20 July ’16):

As to Libya’s attempt to come back in a big way to oil markets: Indeed, Libya’s exports have hovered around 300,000 barrels per day recently, dramatically lower than its pre-conflict 1.6 million bpd.
It seems some significant increase is possible on the heels of the recognition of the UN-brokered unity government by Tripoli authorities in April, and the reunification of the NOC in recent weeks, which managed to unite the two rival factions. However, the present strike by oil-field guards is an example of chronic difficulties one should expect.
By “significant increase,” I mean that perhaps 300,000 or 400,000 more barrels per day, in an optimistic scenario, could be added with a determined effort over several months. However, on the other hand, there is not a lot to be optimistic about.
On the downside:
First, the country’s territory remains split into myriad separate fighting groups, each occupying strategic pieces of the nation’s up- and down-stream oil facilities. (See the Bloomberg map below.) Even if a given faction cannot produce or transport oil it controls, it hangs on to it for leverage. In addition, only the NOC can legally export oil
Second, much of the country’s oil production and infrastructure has been damaged by fighting.. Repairs require centralized control and for investors to have confidence in security. Simultaneously, Libya’s Islamic State affiliate, although at bay, has vowed to destroy oil infrastructure to deny the state revenues and ability to recover, such as the attacks it  carried out on infrastructure in February.
The bottom line is that there has recently been a general improvement politically and in the NOC’s capacity; however, further political processes to end the reign of of often-warring  local militias is a protracted struggle. Only this would enable Libya to get to 1 million bpd and beyond.  –  Tom O’Donnell, Wikistrat Senior Energy Analyst & Hertie School of Governance-Berlin