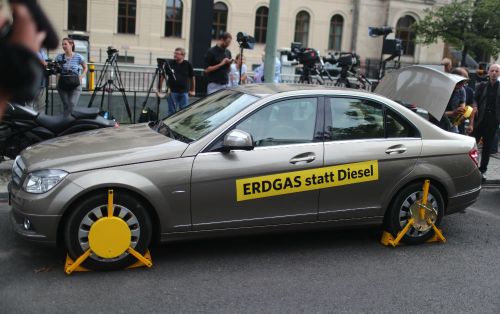 Germany’s Real LNG Policy
Germany’s government has endorsed imports of liquid natural gas for the first time—but not because of Russia and Nord Stream 2.

The German federal government has decided in favor of building liquid natural gas (LNG) import terminals and infrastructure. In March, Chancellor Angela Merkel’s CDU/CSU-SPD government, in its “coalition contract,” pledged to “Make Germany the site for LNG infrastructure.” This is a notable policy change, because in Germany the opposition to LNG imports and use has been so much stronger than anywhere else in Europe.

The aim of this new endorsement is to reduce maritime and roadway heavy-transport emissions. However, many in Germany argue that using “small-scale” LNG in this way, as a “bridging” fossil fuel, is “wasted investment”. They contend that Energiewende-mandated electric vehicles can and will rapidly de-carbonize heavy transport. Still others oppose LNG imports on the grounds that they would unnecessarily diversify Germany’s gas suppliers with the aim of offsetting increasing reliance on Russian pipeline gas. They insist that Russian pipeline gas has been “historically reliable” and is cheaper for Germany than building large-scale import terminals for LNG.

Though the federal bureaucracy had been advancing this policy change for over a year, top government officials did not make any particular effort to bring the issue to public attention or to drum up support. Accordingly, media and public understanding of the federal government’s motivations has been less than ideal.

There are two main points to understand. First, the aim of the new policy is clearly to address long-standing environmental and competitiveness problems in German marine and heavy road transport: compared to diesel, LNG as a transport fuel is much cleaner, emits less CO2 and is generally cheaper. Second, the approved small-scale LNG import facilities will not reduce German dependence on Russian pipeline gas, which is used for conventional purposes. The new policy is not intended to reduce dependence on Russian gas and the controversial Nord Stream 2 pipeline, contrary to various press reports.

The first facility to win approval from Berlin (and previously from Brussels) is planned for the North Sea port of Brunsbüttel, near Hamburg. The initial focus on the Hamburg region is logical. From there, LNG can be shipped up the Elbe River as an inland-shipping and road-transport fuel. In addition, there is access to the Kiel Canal, the world’s busiest artificial waterway, where LNG can be used or delivered into Scandinavia and the Baltic region. Hamburg is also Germany’s major container port, and the shipping industry has begun converting engines to LNG fuel globally.

However, as well as facilities for fueling ships and trucks in the immediate port area with liquid natural gas, and shipping some gas onwards, the plan also includes an onshore regasification unit and connections to the existing gas-distribution network for conventional gas applications—heating, electrical generation, etc. Experts feel this will provide the project’s developers with flexibility, as it will take time for LNG road-transport infrastructure to develop in Germany. Currently, it is almost nonexistent.

The €500 million terminal will have facilities to transfer, store, and redistribute the liquid for use as maritime-bunker fuel, road-transport fuel, and various industrial applications. Such direct use of LNG as a liquid fuel, without regasification, is known as “small-scale” LNG. This is distinct from “large-scale LNG,” which involves much-higher volumes that are re-gasified in huge facilities and injected into the gas grid for conventional uses.

A sense of scale is important. The Brunsbüttel facility will receive LNG equivalent to 5 billion cubic meters (bcm) of gas per year. In 2016 Germany consumed 80.5 bcm of gas. So the Brunsbüttel facility’s capacity to re-gasify a portion of the LNG could help replace a part of the gas Germany now receives from the Netherlands, whose Groningen field is mandated to close soon. But the small scale of the new facility’s means it cannot significantly diminish Germany’s great dependence on Russian and Norwegian pipeline imports.

Indeed, despite a spate of articles claiming the contrary in major media outlets, including Der Spiegeland Bloomberg, the goal of the federal government’s new LNG policy is not to cut dependence on Russian gas. The entire regulatory and ministerial review process clearly focused on fueling maritime and heavy-road transport. Clearly, this small-scale facility provides no serious counterweight to Germany’s Gazprom imports, which are projected to rise from current levels of 55 bcm via Nord Stream 1, to 110 bcm of gas per year when Nord Stream 2 is complete, or about 60 percent of total German gas imports. At present, Germany receives 31 percent of its gas from Russia and 24 percent from Norway. Reversing this reliance on Russia would require multiple large-scale LNG regasification terminals capable of fueling a major portion of the country’s conventional gas demand for electricity generation, heating, etc.

So what is the motivation for the new LNG policy? 46.1 percent of German GDP is dependent on exports (2016 data), compared to 26.9 percent for OECD states overall. Therefore, it is especially important that Germany be competitive in its maritime and heavy road transport to move all those goods. Yet despite having pinned the nation’s commercial future on the success of the Energiewende, actors from government, industry, political parties, and climate/environmental institutions have, embarrassingly, accomplished virtually nothing when it comes to cleaning up air-pollution and carbon emissions from transport. The so-called Verkehrwende (transport transition) is going nowhere. The ongoing diesel scandal is but one aspect of this, involving passenger vehicles. However, in maritime and heavy trucking, Germany has fallen disconcertingly behind many other European states and the United States.

For example, in California, after some 15 years of efforts, in 2015 fully 60 percent of all buses were running on compressed natural gas (CNG), as were 17 percent of all U.S. buses. This means their engines were emitting about 99% less particulates and sulfur dioxide, 70% less nitrogen oxides, reducing noise pollution about 50% and emitting from 12 to 20 percent less CO2 than diesel fueled engines, which remain ubiquitous in most German cities. Using LNG in buses would bring similar environmental benefits to Germany.

Moreover, over the past few years, the use of LNG for maritime and heavy-transport fuel has begun to take off in the US, China, and parts of Europe. The US Energy Information Agency expects American railways to undergo a transformation from diesel-to-LNG similar to that of steam-to-diesel for locomotives in the 1950’s; this shift would be both environmentally beneficial and reduce cost, as LNG has a similar energy density to diesel, but it is broadly cheaper and much cleaner.

While Germany has made little progress on cleaning up heavy transport, international organizations have recently mandated new emissions standards. In maritime shipping, clean-fuel regulations requiring that carbon emissions be cut by half by 2050 were adopted for the first time this April by the UN’s International Maritime Organization. Most analysts expect that meeting these targets will “require the shipping industry to completely redesign their fleets around new fuels.” Accordingly, the German maritime sector has pressed the federal government to facilitate LNG infrastructure, lest it fall behind in global competitiveness.

So too, for the trucking industry, as Brussels moved in May to adopt its first carbon emissions targets. German business has pushed Berlin to foster the infrastructure and policies needed to facilitate the shift to new fuels such as LNG. Given the country’s very-high export-dependent economy, it is of utmost importance that it does not become an LNG ‘desert’ among other EU neighbors, who have already begun to meet Brussels’ mandates for LNG fueling stations. If Germany had no LNG capacity, the uninterrupted movement of road or waterway freight via the country would be threatened. Accordingly, the federal government and Brussels have both recently begun providing subsidies for LNG adaptation in Germany.

To be clear, LNG brings serious benefits. But LNG is not carbon free, and is likely to be only a ‘bridging fuel’ to other technology. However, power-to-gas technology, which would use renewable energy to produce natural gas or hydrogen for such purposes, is today far from feasible at scale. This is also true of electrification of heavy road and sea transport.

So, given that LNG is useful in the present, why has there been so much opposition to the import and use of LNG in Germany? This opposition has come, broadly speaking, from two camps.

The first camp asserts that, regardless of other countries’ experiences, Russia has been a historically reliable gas provider, and so building large-scale LNG import terminals would be an expensive and unnecessary energy security policy. This dovetails with a widespread conviction among German business and political elites that only via mutual German-Russian interdependence, especially in the energy business, can Germany ameliorate geostrategic tensions. Repeated bad behavior by Moscow does not shake this conviction; on the contrary its makes interdependence even more necessary.

A second camp argues that LNG use—large- or small-scale—is antithetical to the renewable-energy goals of the Energiewende. Here, natural gas and LNG are often dismissed out-of-hand as simply another fossil fuel, “largely produced in the USA” by “environmentally dangerous” fracking that is banned in Germany. Therefore, according to this reasoning, it would be “hypocritical” to import it.

However, scientific assessments by the International Energy Agency present serious challenges to many of the popular, environmentally motivated concerns about LNG use. When the agency reviewed studies of “methane leakage” conducted in recent years, it concluded that natural gas is indeed superior to coal, and can and is being improved by better regulation of leakages in its production and supply chain. And while many challenge official assessments of leak-rates from U.S. production sites, most agree such leaks can be minimized with improved maintenance and regulations. Moreover, aside from this concern there is no challenge to LNG’s very significant pollution-and-noise reduction advantages over diesel. Nevertheless, in a number of discussions earlier this year in Germany, I found strong opposition, on principle, to the idea of distributing LNG in liquid form as a transport fuel (i.e., “small-scale” LNG).

Basically, the line of argument here is that, in light of the goals of the Energiewende, Germany can and will be “zero carbon in transport” in a couple decades–and so expenditures on LNG infrastructure will be “wasted investments.” Given Germany’s presently dismal record in greening transport, including the stubborn diesel scandal, the hubris of this technological optimism appears rather large. It also neglects the fact heavy roadway and sea transportation are technically much more difficult to electrify than passenger vehicles.

In response to my inquiries, representatives of major international energy companies in the past year described frustration in finding any interest in Germany for LNG. Unlike in other EU countries, they said they could see no prospects in the German market. They expressed amazement at the German insistence that LNG is not needed to help displace coal or diesel.

The real Meaning of Brunsbüttel

Much of the popular and elite opposition to using LNG in Germany is based on a sort of technological optimism that sees the good as the enemy of the perfect.

Nevertheless, what is clear is that political decisions were taken to address long-standing environmental and competitiveness issues in heavy transport. But there was no appetite for a larger, forthright confrontation with the pervasive hubris about what are in reality very difficult and still-unsolved technical and economic problems preventing fully green heavy transport. It is also clear that these decisions had nothing to do with hedging Germany’s heavy and increasing reliance on Russia gas via the Nord Stream 2 project.