I was interviewed by Gillian Rich at Investors Business Daily (Washington, DC) on non-OPEC Russia’s role in the production cut.  The article of December 9, is below. A few points first:

1: President Putin and his minister of energy Alexander Novak‘s participation in the OPEC decision – actually making middle-of-the-night phone calls to mediate between Iran and Saudi Arabia, plus publicly promising to cut Russian production – is totally unprecedented. Never did the Soviets, nor  post-Soviet Russia  ever do any such thing previously. Why now?

2: As Rich quotes me as saying, oil prices below $60/barrel impose severe constraints on the Russian state’s income. Indeed, the federal budget has actually been based on $50/barrel, and yet the difficulties are apparent. Although Russian oil production is now at a post-Soviet all-time high, low prices have caused the state’s oil and gas income to severely drop. Here is the EIA’s assessment as of October 2016, showing the correlation of Brent price fall (in both dollars and Rubles) on the left, and the decline in oil and gas federal budget revenue on the right: 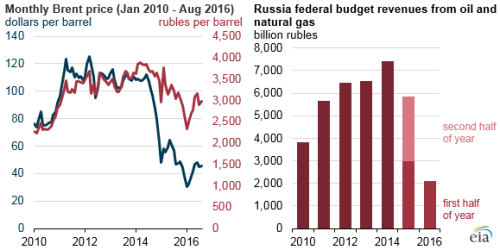 But, how much of Russian national export revenue is derived from oil and gas revenue? The EIA (in 2014) puts this at 68%. Here’s the breakdown:

Nota Bene: Crude oil and products represent 54%, while natural gas is 14% – that is, oil is almost four times as large. This left 32% of Russia’s gross export sales to “other energy and non-energy” items where the energy part includes significant coal, lignite, processed and unprocessed uranium and electricity sales.

Indeed, this is the hallmark of a rentier state, not a modern industrialized, service-sector oriented society, much less a high-tech one (with notable exceptions in weaponry, nuclear energy, and etc.)

3: So, bottom line, what does this mean for the State?  There are two emergency funds intended for use in such circumstances. One will likely be exhausted this year and a second fund, intended for pensions and such, not for replacing budget deficits, is being tapped to replenish foreign reserves. Looking at the state’s foreign reserves graphically, we have this:

I have made the time axis here identical to the first EIA graphs, to facilitate comparison. Note, the baseline is not zero, but $350 billion. Russia was known to have had big reserves, but given low oil prices and the US and EU oil-and-finance sanctions over Ukraine, roughly a couple-hundred-billion dollars of reserves were lost, with about $50-billion regained as oil prices rose a bit this past year.

4. The first EIA chart above also shows a big divergence between the dollar and ruble price of Brent crude, reflecting the big devaluation-to-date of the ruble. This indeed helps the economy and the state in various ways; for example, with anything it can pay for at home in rubles.  However, with Russia hot having a significant percentage of its income from manufactured goods or agricultural exports, this low-valued currency does not give the boost it would give to a diversified industrial economy such as Western Europe, Japan, Australia, Canada or the USA.

Lastly, if we listen NOT to predictably pessimistic western analysts, but to the Russian federal finance minister himself, Anton Siluanov (speaking to Bloomberg in January 2016), Siluanov makes clear that  cutting the budget 10% in 2016 would only account for about 1/3 of the needed cuts and that raising cash from privatizations would be necessary along with spending down the aforementioned reserve fund. Indeed, after much shady ado in the Kremlin, which included the arrest of the federal economics minister, Rosneft has indeed privatized part of its state shares, 19.6% of the company, reaping 10.3 billion euros for the state budget. In further years, areas now forbidden to be cut, military and social spending, would have to be considered. You can listen to Siluanov here.

Putin knows very deeply how badly things can go if energy prices, and especially oil prices, remain low (as they likely will). He came to power at a time following the period of dire economic hardship following the crash of 1998
when Russia defaulted. In the years just following, in the first years of his presidency, he faced constant pressure from unpaid retirees and military personnel and others, and would likely have been a short-term president had oil prices not spiked on the back of sustained high Chinese and Asian demand from 2002.

Since then, all his attempts to re-industrialize have failed and, obviously contrary to what he had hoped for, Russia has been locked into being a rentier state with all the familiar imbalances seen in larger-population OPEC states, albeit moderated somewhat by the remaining, though greatly battered, legacy of former technical, scientific, military, cultural and other achievements of Russia decades ago.

So, it should be no surprise Putin’s Russia is now getting deeply involved in the geopolitics of the Middle East and is working in tandem with OPEC’s Iran, Venezuela, and others, as its economy more than ever now is coming to resembles those state’s  economies, and its interests are coming to coincide more than ever before with the interests of such large rentier states. And, if, once again, Russia under Putin cheats on the quota it promises to OPEC, this is merely more evidence – after all, cheating on quotas is also the tradition among OPEC’s weakest, price hawk states.

All this is not to say there will be some sort of collapse in Russia’s economy. Rather, this situation is a significant part of what is driving Putin to involve Russia more deeply in OPEC and Middle East affairs – most recently quite closely coinciding with Iranian interests. So too, the decline recently in US-ally Saudi Arabia’s position in its regional contention with Iran (i.e., Saudi setbacks in Syria, in the Yemen war, in the new Lebanese government, with Sisi’s Egypt and with having to accept that Iran won’t make significant OPEC cuts – all of which the Economist correctly pointed out today), also means that Russia is increasingly allying itself (*) with forces the USA has long opposed.  Whatever Trump’s predilection to downgrade confrontations with Russia, this all actually portends more tensions between Russia-plus-Iran as versus the-USA-plus-Saudi Arabia.

(*Correction: “allying itself” was initially “butting heads,” a typo giving the opposite idea from that intended. And a couple other typos/syntax issues have been fixed.-10dec16, Tom O’D.)  Here is the Investor’s Business Daily article with my quote, of 8 December:

Only a handful of non-OPEC countries plan to meet with OPEC officials Saturday to hammer out details of oil production cuts that are required before the oil cartel implements its own reductions.

The Organization of the Petroleum Exporting Countries finalized a deal last month to cut production by 1.2 million barrels a day starting in January, but non-OPEC members must cut 600,000 barrels per day or else the agreement falls apart.

Crude prices initially shot up after OPEC’s deal was announced but have crept back down as investors scrutinize what has been said — and not been said — since. On Friday, West Texas intermediate oil climbed 1.3% to settle at $51.50 a barrel. Brent rose 0.8% to finish at $54.33.

Details on which non-OPEC states will cut and how they will cut are supposed to be determined at this weekend’s meeting in Vienna, but just five of 14 “NOPEC” invitees are attending, sources told Reuters. They include Russia, Kazakhstan, Mexico, Azerbaijan and Oman. Here is where each of the top players stands now:

Russia said last month it will cut output by up to 300,000 barrels per day in the first half of 2017. But the Kremlin immediately wavered as Energy Minister Alexander Novak cautioned that Russia will “gradually” reduce production due to technical issues.

Moscow also hasn’t said what its starting point would be for its cut. Russia pumped out a post-Soviet Union record of 11.21 million barrels a day in November, so a baseline would lessen the impact a cut would have on global supply.

Russia is meeting with some OPEC and non-OPEC members on Friday, a source told Reuters. Russian officials are questioning OPEC’s commitment to complying to the output cut as production from the cartel increased last month, despite Russia’s own record output in November.

Jim Krane, an energy analyst at Rice University’s Baker Institute, noted that Russia’s oil sector is so spread out geographically that it’s hard to verify whether Russia is actually making reductions.

Also, Russia would have likely curbed production during the winter without a deal anyway.

According to Bloomberg sources Wednesday, OPEC will accept natural declines from non-OPEC members to get a production-lowering deal to pass. That means nonmembers may not be required to actively reduce output, according to the report, potentially easing the path to securing an agreement.

But the cartel still expects Russia to intentionally cut the 300,000 barrels per day, according to Bloomberg. So far, only Russia and Oman have agreed to actively cut.

Despite Russia’s potential wiggle room, it has an incentive to prop up crude prices. Thomas O’Donnell, a senior energy analyst at the consulting firm Wikistrat, said that Russia needs oil to be in the $60s or else it “starts to have some serious problems” with government funding.

Krane added that Russia has much to gain from the production deal. “If they can get more revenue from higher prices and make a small sacrifice, it’s kind of a no-brainer for them.”

The former Soviet republic is finally exporting crude from its Kashagan field in the Caspian Sea after years of development delays and cost overruns. International oil majors Eni, Total (TOT), Royal Dutch Shell (RDSA) and Exxon Mobil (XOM) have stakes in the field and are eager to get exports out.

Kazakh Energy Minster Kanat Bozumbayev told Reuters Wednesday that the field will produce 192,000 barrels of oil per day next year.

While Kazakhstan will attend the talks and said it supports an output reduction, Bozumbayev said he hasn’t committed to anything yet.

“It is important that all the other (parties to the talks) reach an agreement,” he said. “We have calculated our (production and consumption) balance and we have our own clear position. Our oil producers will not suffer.”

Officials in the past have said they won’t agree to any cut, but the country’s production has declined over the past decade, and output was already seen falling 10% next year from 2.1 million barrels per day in 2016, according to reports.

Brazil said it wouldn’t attend the meeting or cut production. Its production rose to 2.6 million barrels per day this summer, up from 2.35 million last year, according to S&P Global Platts.

State-run Petrobras (PBR) has been roiled this year by a widespread government corruption scandal, and last month cut the value of its oilfields and other assets.

Bahrain, Bolivia, Brunei, Colombia, Republic of Congo, Egypt, Republic of Trinidad and Tobago, Turkmenistan and Uzbekistan were also invited to Saturday’s meeting but have yet to agree to attend.