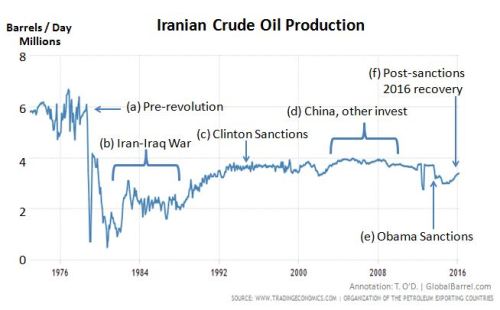 To put Iran’s recent production increases in perspective: On its own, for 37 years, Iran has struggled to produce two-thirds of its pre-revolutionary level of 6 million barrels/day. Now, domestic opposition is again limiting foreign oil companies’ participation to boost production.

Since the Obama-administration’s and Europe’s nuclear sanctions were lifted early this year (marked ‘e’ on the chart), Iran has been expanding its production and exports more rapidly than most experts had expected. Tehran has actually tripled exports since late-2015 (see point ‘f’).  But, here’s the big question: Can Iran sustain this years’ production gains?
If to, this could seriously undermine Saudi Arabia’s global oil-market share, and boost Iran’s sanctions-damaged economy to a long-awaited recovery.
The short answer: Now that foreign sanctions are finally lifted, the battle to boost Iran’s oil exports has shifted to a domestic clash over whether to allow foreign oil companies to have significant upstream involvement. This is a domestic Iranian issue with a long history.
Historical perspective
Let’s start with some historical perspective: The Iranian National Oil Company (NIOC) can only do so much on its own to boost production. After decades of sanctions, it lacks the needed technology and finance.  I told CNNMoney‘s Matt Egan, on Wednesday, that the faster Iran expands on its own, the faster production will plateau. (His CNNMoney article today quotes me .).
This was what happened after the 1980-1988 Iran-Iraq war.(‘b’ on the chart). By about 1992, production had plateaued at almost 4 million barrels/day, under 2/3 of the pre-revolutionary, late-1970’s level of roughly 6 million barrels per day. (‘a’ on chart).  The Iranian president at the time, Rafsanjani, argued to religious conservative and nationalist members of the Majilis that only foreign oil companies’ technology and investments could expand production further. However, he only won grudging approval for an offshore project due to fears that foreigners would bring their irreligious ways ashore and/or undermine the hard-won nationalization of Iran’s oil sector.

But then, in May 1995, Bill Clinton imposed the first US sanctions on Iran’s oil sector due to Tehran’s nuclear program (point ‘c’). And, as can be seen from the chart above, over the next 20-plus years, Iranian production has never gone much higher as it experienced varying degrees of sanctions and periods of foreign investment by Chinese and western firms (see .’d’).
Today
Now, coming back to the present, today’s leadership of Iran’s national oil company is also painfully aware of what Rafsanjani realized at the end of the Iran-Iraq War: To increase production significantly above two-thirds  of the pre-revolution level, the sector urgently needs to attract foreign oil companies’ technology and investments on a large scale.
In fact, international oil companies (IOCs) have been anxiously anticipating these opportunities since well before it was clear a nuclear deal would be signed. Iranian oil is very cheap to get out of the ground and thus inherently very competitive even in this low-price market. This makes Iran a places the IOCs would love to invest to offset the big investment cuts they have had to make in higher-cost projects since prices fell.
Domestic opposition
So, what is the holdup?  On this point, my comments to CNN differ from those by other experts quoted in this article today from Bloomberg . Those who spoke with Bloomberg attributed the slowness to foreign companies’ reticence about running afoul of some remaining US sanctions, which prohibit dealing with Iran in US dollars.
Indeed, dollars can be an issue, but, with all due respect (esp. to Dan Yergin), the IOC’s have lots of experience dealing successfully with such restrictions in various countries – as long as it’s legal to be working in the given country.  So, this is hardly a deal breaker.
This all begs the question: why have the details of new contract provisions not been forthcoming from Tehran for so long now?
As I indicated to CNN, this has to do with internal Iranian policy clashes, between factions having conflicting economic interests. In particular, academic experts report that the Revolutionary Guards have had a lucrative business under sanctions contracting with the INOC for oil-field service work.  And, they are not inclined to let themselves become exposed to competition from highly capable international firms.  So, they have blocked agreement on new contract terms that wold permit more foreign involvement. In this, it is easy fr them to opportunistically play the nationalist card. And, there remains in Iran significant opposition from religious conservative and nationalists who oppose any foreign upstream participation, esp. foreigners owning oil reserves in any form.
Here is a case, not unusual in Iran, of a corrupt faction putting its own narrow economic interests over the national interests. The nation’s interests clearly favor seizing the opportunity presented by the end of export sanctions to attract foreign investment for rebuilding the oil sector and boosting exports while the time is ripe in the market to do so.
(Aside: Failure to do so now, when Iran has a competitive advantage with its low-cost reserves, could stall its oil-production recovery for many years hence. In this, the mullahs running the country can take an object lesson from Venezuela.  There, a decade  or more ago, Hugo Chavez  turned away the many foreign companies that were then happy to pay top dollar to develop Venezuela’s extra-heavy oil in the Faja Orinoco. He even gave the Chinese a very hard time to invest (as opposed to loaning money for oil deliveries due years later). And then came the US fracking revolution and then came low prices and now no-one wants to make big investments in upgraders for extra-heavy oil.  So too, Iran’s unique moment might soon have passed.)
Where are Iran’s long-promised new-contract details?
It is well know that foreign companies have been waiting to see the INOC’s  long-promised new contract terms. There has been repeated disappointment with what has been offered till now.  I am told by companies involved that, in each instance, the details have been both exasperatingly thin and not so different from the old pre-sanctions “buy-back” contracts which all sides agree will no longer work.
(Aside 2: For a brief explanation of how the old buy-back contracts prohibited foreign ownership of upstream resources and restricted investments, see the EIA’s Iran country analysis, written a full year ago, back in June 2015, which already said: “Iran is planning to change its oil contract model to allow IOCs to participate in all phases of an upstream project, including production.”  Meanwhile, sanctions blocking Iranian exports have been lifted since January of this year,  and the promised new foreign-participation contract details are still unclear.
Future
It’ll be interesting to see how this plays out.  If the Iranians don’t get domestic agreement on their contract terms solidified … and offer terms that are sufficiently appealing to the big foreign firms they need to attract for long-term projects, their present production expansion will stall, at best, at the same level it always has since the Revolution 37-years ago: around 4 million barrels per day.
That would be good news for the Saudis and ambitious Prince Mohammad, but not good for Iranians generally who are weary of their years-long depressed economy and the domestic political and economic dysfunction under the rule of the mullahs.

One response to “What’s keeping foreign oil firms out of Iran? IRG? [CNNMoney quotes me]”