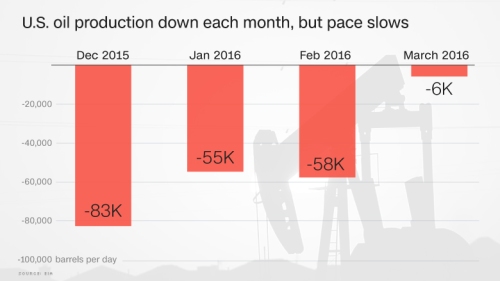 I was interviewed today by CNNMoney’s Matt Egan on what  OPEC should expect from US shale as they hold their 169th “Ordinary Meeting” in Vienna tomorrow (2 June).  Indeed, at some point oil production and demand will balance (likely in 2017), and then the Saudis and OPEC will have to cautiously test the presently unknown dynamics of high-tech US shale on the rebound. -Egan cites my point  of view in his article. Read on … – Tom O’D.

Don’t bet against the resilience of U.S. oil companies

Many expected U.S. oil output would collapse under the weight of a lengthy price war with the mighty OPEC, the fractured oil cartel that’s meeting in Vienna Thursday.

The U.S. oil boom, fueled by the shale revolution, has obviously taken a few punches from OPEC’s strategy of all-out pumping. But the latest numbers show that American production continues to remain stubbornly high in recent months despite the crash in crude to as low as $26 a barrel in February.

The U.S. pumped 9.13 million barrels per day in March, down by a miniscule 6,000 barrels from the prior month, according to stats released this week by the U.S. Energy Information Administration. That represents a deceleration from recent monthly declines. By comparison, daily U.S. output dropped by 58,000 barrels in February and by 83,000 barrels in December.

“It’s been more resilient than everybody expected — even the producers themselves,” said Thomas O’Donnell, a senior energy analyst at consulting network Wikistrat.

Yes, the U.S. is pumping about a half a million barrels of oil less than the same period of 2015. But that year-earlier period was a near all-time high.  All told, output is down less than 6% from the April 2015 peak. U.S. production is actually up by nearly 11% from 2014 and nearly double what it was in 2011.

“These low prices have paused the shale revolution, but not killed it by any means,” said Matt Smith, director of commodity research at ClipperData.

So what gives? Firstly, all of a sudden there’s a lot more oil coming from the Gulf of Mexico. Production there has been on the rise due to the long lead times required by expensive deep water projects. Gulf of Mexico production rose by 60,000 barrels between February and March and the EIA believes it could hit record highs next year.

The other thing is that U.S. shale output hasn’t declined by as much as feared, despite deep cutbacks in spending. The EIA actually revised its February numbers higher due to stronger pumping from North Dakota, home of the huge Bakken shale.

Chalk this up to the fact that cheap oil forced American shale producers to get a lot better at pumping cheaply. Many have made huge operational improvements that allow them to drill more oil per rig, bringing costs down.

“They don’t give up easily. They’re fighting for their business,” said O’Donnell.

At the same time, costs have come down significantly due to price cuts by oil services who have lost a ton of business amid the downturn.

None of this is to say that frackers aren’t struggling. Many are — and at least 77 North American oil and gas producers have filed for bankruptcy since the start of 2015, according to law firm Haynes and Boone.

But the ones that have survived have become better at pumping more with less.

“The productivity increased at a dramatic rate — at rates you don’t see during an industrial revolution,” said O’Donnell.

The big question going forward is whether the recent rebound to $50 oil breathes new life into the U.S. oil boom. These higher prices are likely to entice at least some frackers to start pumping more.

The key element here is the so-called the drilled-but-uncompleted wells sitting in shale plays.

For instance, Whiting Petroleum, the largest producer in the Bakken, recently said the company would start tapping its collection of 100 uncompleted wells if oil prices can stay at $50.

“Bringing down that number of (those wells) would be one of the first things we would do at higher prices,” Whiting CEO James Volker said during a conference call at the end of April.

If history is any guide, investors may be underestimating the resilience of shale producers. But since it’s a relatively new technology, it remains a bit of a mystery.

“It’s never been tested. The dynamics are not known by anybody,” said O’Donnell